Improved quality of life through

Breast cancer is the most common malignant tumor in women worldwide and the second leading cause of cancer-specific mortality in women in Europe. Mastectomy rates have increased significantly in recent years, partly because women elect more often to have contralateral or bilateral prophylactic mastectomy performed. Quality of life of the patients is greatly improved if the mastectomy is followed by a breast reconstruction.

An essential critical factor with regard to perioperative complications (especially in wound healing disorders, necrosis) is breast tissue/skin perfusion. The rate of perioperative complications in oncoplastic breast surgery is given in the literature to be around 45% on average (1-2). Perioperative complications (wound healing disorders, wound infection, skin necrosis, flap necrosis, etc.) often necessitate a new operation and lead to an extended hospital stay. They also mean stress for the patient concerned. The aesthetic result is usually poorer and the adjuvant therapy can be delayed, which in turn can mean a deterioration in the prognosis for the patient, and thus decreased quality of life.

According to a recent study(3) for understanding the perfusion pattern in DIEP flaps aids surgeons with surgical planning and in deciding which parts of the flaps are viable. Measurement of perfusion during surgery may give even further insight into which parts are to be discarded, as regions with low perfusion may be at risk for postoperative necrosis. The speckle pattern created on a surface by a laser source will contain information about the speed and concentration of erythrocytes in the superficial capillaries of the skin. The pattern is analyzed by a computer that presents an arbitrary value of the perfusion. This means that the flap can be reassessed multiple times before, during, and after the operation. 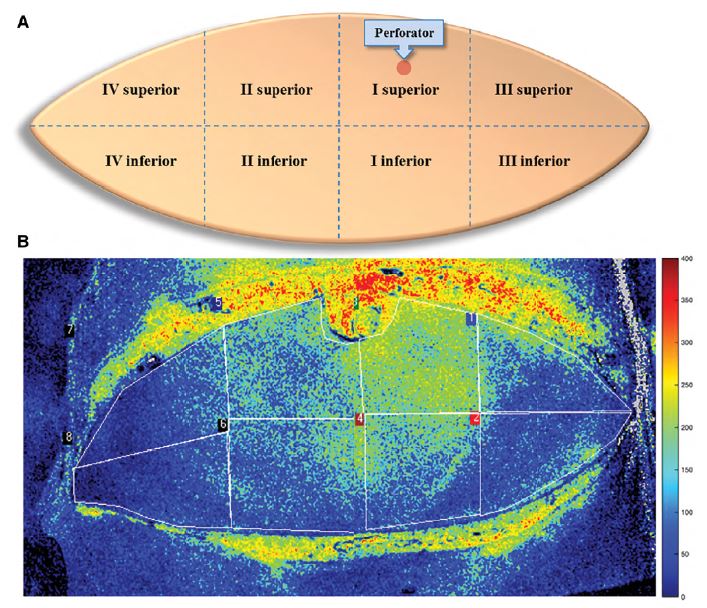 Schematic representation (A) and typical LSCI perfusion image (B) showing the regions in the DIEP flaps in which perfusion was analyzed (the perfusion map is composed of 2 images taken at the same time point). Hartrampf zones I–IV were subdivided into superior and inferior parts. The perforator is found in the superior part of region I. The warmer colors represent higher perfusion values, and the image clearly shows a well-perfused area above the perforator. In this particular flap, the surgeon would preferably have chosen zones I and II for the reconstruction and discarded the rest of the flap.