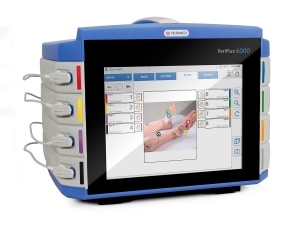 Post-occlusive reactive hyperemia (PORH) is used to investigate and assess microvascular function (endothelial function). The test involves blood perfusion measurements before, during and after occlusion.

PeriFlux 6000  —with a standard laser Doppler probe and cuff—can be used to monitor a PORH reaction. In this case, the laser Doppler probe is placed distal to the cuff, which is then inflated to a pressure well above the systolic blood pressure. After a three- to five-minute occlusion, pressure is released instantly, and the laser Doppler signal is evaluated. Important parameters to evaluate include time to resting perfusion, time to half recovery, percentage change from baseline, maximum perfusion and area under curve.

PeriFlux 6000 EPOS can be used similarly to the standard laser Doppler systems PeriFlux 5000/6000, but with additional recorded parameters, including microvascular oxygen saturation and speed resolved perfusion. This system was for example used with the PORH in the cohort study SCAPIS [ref 1].

The microcirculatory imager, PeriCam PSI System, can also be used to study PORH. Equipped with a CCD camera that can capture images with a speed of up to 100 fps, PeriCam PSI System can both monitor the dynamics of the response and generate a spatial view of the blood distribution in a given area.